There are quite a few survival games on Steam’s Survival Fest sale, going for the next two days. If that is your favorite type of game, you probably have many of them already. But it might be worth checking out for some of the newer releases. I’m considering getting V Rising since my Valheim playing friends have recommended it. Some of the games on the sale I’ve played and enjoy are Ark Survival, Empyrion Galactic Survival, The Forest, and Subnautica. Unfortunately a few others I might recommend, like No Man’s Sky and Valheim, aren’t on sale right now. Valheim is cheap enough on its own that if you like the survival genre, you might pick it up anyway. I do wish that Grounded was on sale. I played some of it during their beta weekends and it was a lot of fun, minus the spiders… 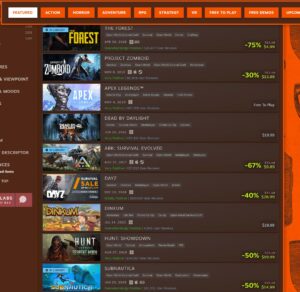 I’m picky about the type of survival game I enjoy. Most of the zombie shooting games are right out. They bring you waves of things to fight that get in the way of exploration, not to mention they love jump scares… I don’t. If a survival game has crafting and makes most of the encounters things you go hunting down, I’m much more likely to enjoy it. Most of my play time is in games that let me easily play them with friends. I also enjoy those with nice beaches and the ability to spend time sailing around. Valheim sailing is the best! One game that is a partial exception to my optional fighting rule is The Forest. 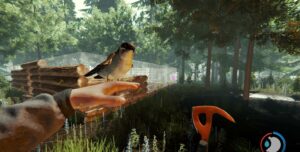 I have put a lot of time into playing The Forest (220 hours), both alone, and with a group of friends. I enjoy the base building aspect of the game, fortifying your base to withstand the eventual packs of enemies that start to notice you. It also has rafts that you can build to spend some “quiet” time on the water, and an overall story arc that you uncover as you explore. It is fun to play with friends and accommodates co-op play nicely. It does have quite a few horror aspects though, so be prepared for those, and the cave exploration part is just downright creepy.

Another game on sale right now that I’ve played a lot (over 1000 hours, wow!), is Empyrion Galactic Survival. It is also easy to play with friends (with a caveat below), and in addition to designing and building bases, you can design and build hovercraft and spaceships. The main reason I have so many hours in the game is from playing in creative mode, designing bases and ships. The game is gorgeous with a wide variety of planet biomes. However, I’m going to hedge my recommendation of the game with this warning. Another one of the reasons I have so many hours in the game is that on multiplayer servers, you quite regularly have to start all over again. The developers have not made the game backward compatible, so your progress gets wiped on a pretty regular basis when they put out a game update. Some people love the fresh start, but I got really tired of it. I also spend quite a few hours in the game just warping all over the galaxy until I find my perfect tropical planet, with rings and blue bioluminescent waters, to build on. 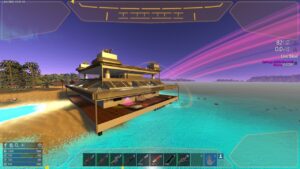 One of the cheaper games on sale right now is Ark Survival Evolved. I’ve played this one with friends and have 219 hours logged. Most of our play time in the game has been in community created mods, my favorite being Crystal Isles where you tame and can ride on Wyverns, think small dragons. The fun aspect of this game is taming and raising pet dinosaurs. One caveat is that you can end up on a server that has PVP, where people can raid your bases, take your stuff, and just be general **holes. I don’t play on PVP servers, but some people love the clan wars aspect of it. We host our own games and don’t have to put up with the jerks. 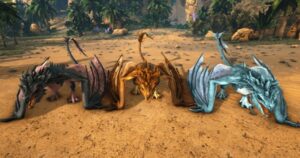 You’ve probably noticed a common thread in the games I’ve talked about. That is playing them with friends. I really enjoy being able to hop into Discord with friends across the country and build and explore together. Another commonality is the ability to avoid playing these games on open PVP servers. You can end up with a lot of griefers, so the PVP aspect must be optional for me to enjoy the game. While I’m currently playing and enjoying No Man’s Sky, it still has a ways to go to make co-op play a seamless experience. There is an added challenge right now with the Expedition 8 conversion to a normal save, and I can’t play it with my hubby at all, which is a shame. We pushed to finish the expedition at the same time so we could find a planet to build on together, and now we have to wait until this is fixed.

Do you play these types of games and have you enjoyed any of my favorites? Am I missing a hidden gem?