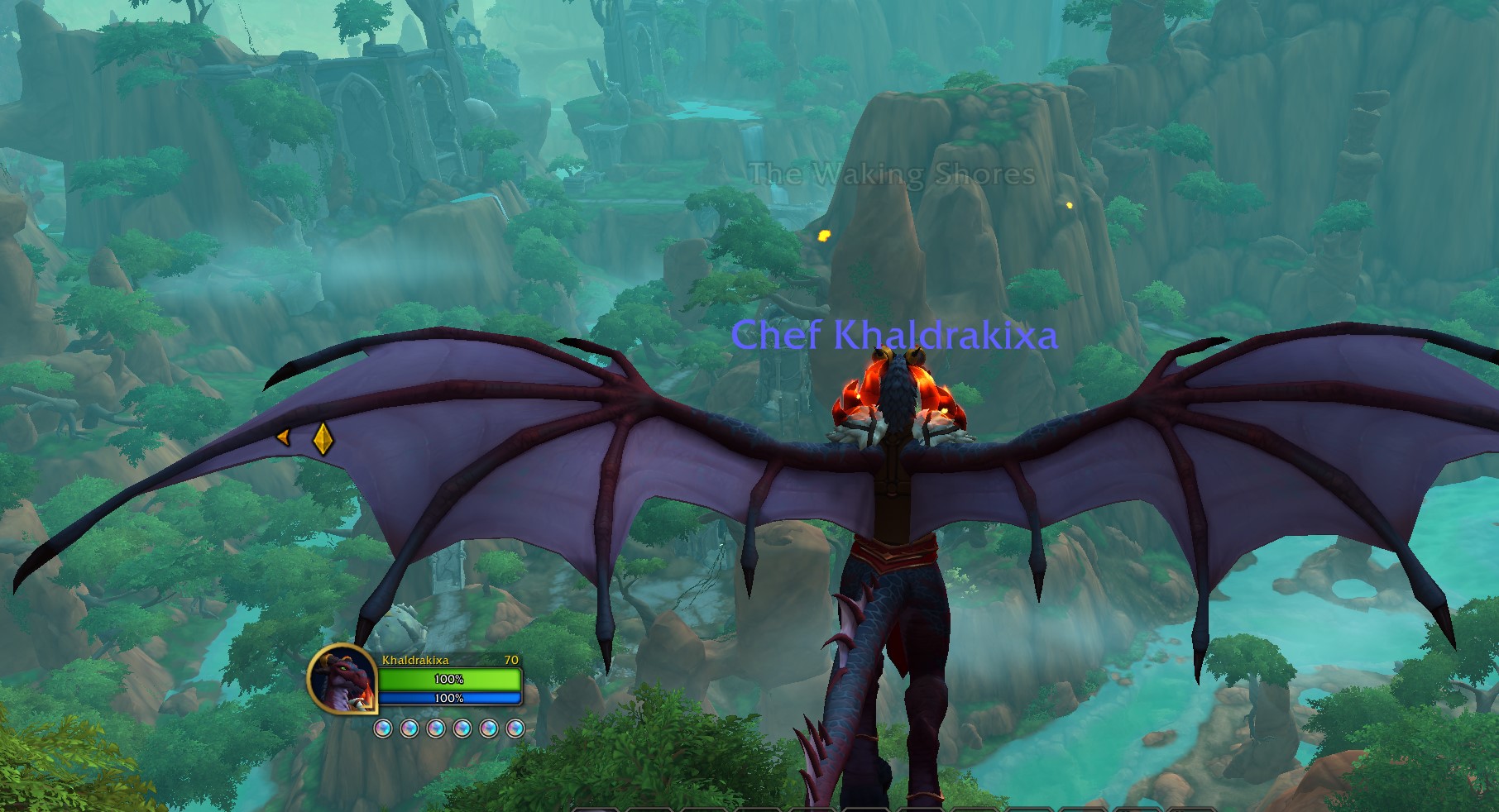 As the title says, I still haven’t made up my mind about long term play in WoW’s latest expansion. I have allowed my sub to renew once, and I will probably let it renew again at the end of this month. For a little while it looked like I was done, but then I started logging in again and doing quests on various alts, so I guess I still have things to do. But, I have OPINIONS about things like crafting, world questing, dungeon cycles and flying. 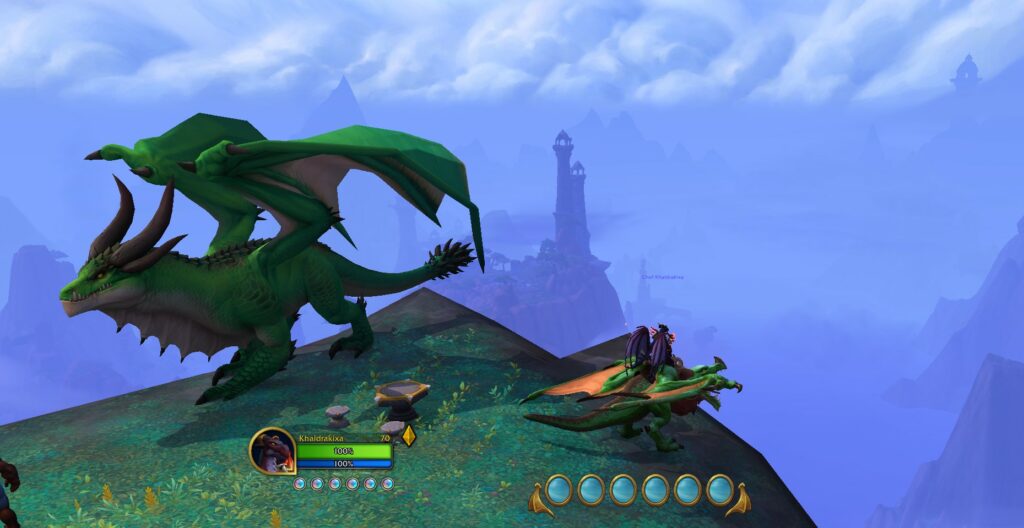 Flying, let’s start with that. I have to say, zooming around on the dragonriding mounts is a ton a of fun. The music in the expansion is very upbeat and blends very nicely with the feeling of soaring, zooming, and dramatic landings. The ability to take a quick hop over packs of mobs and avoid some of the slog of fighting through to  objectives makes me much happier exploring the different zones and questing. I do miss my large stable of other flying mounts. Their mount customization system is fairly interesting, but most of the really nifty looks are locked behind a reputation slog or group content gates, so I will probably not bother getting them. 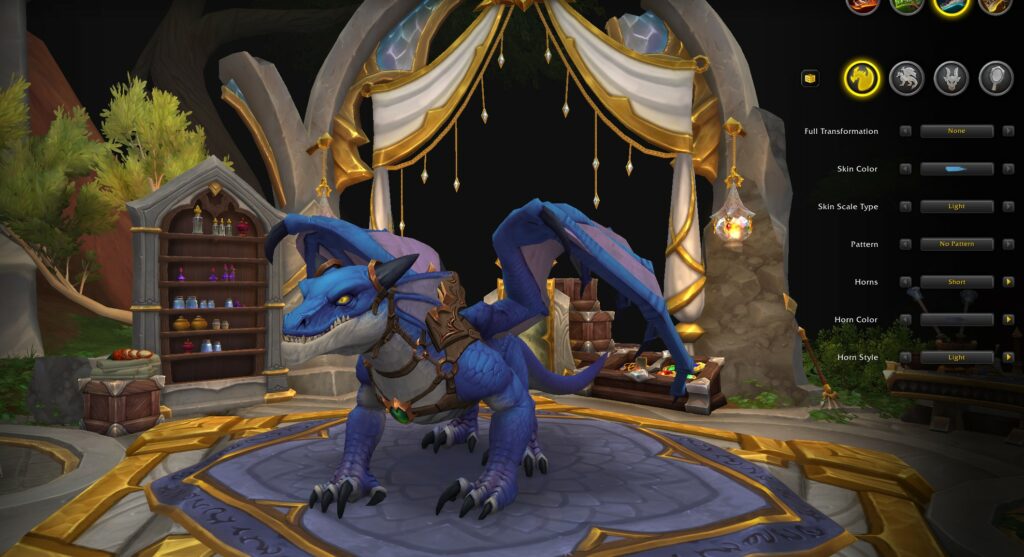 Most of what I love about flying in the game has been included with the new flight mechanics. They’ve also added in some fun quest objectives tied into the new flight system, and so far I’ve enjoyed doing those. The biggest plus is not having to slog through unlocking the flight upgrades with every alt. I’ve picked up all of the glyphs through a variety of characters and all of them get the benefit of that time spent. It has made me much more willing to bring my cadre of crafters up to level 60 and into the new zone. 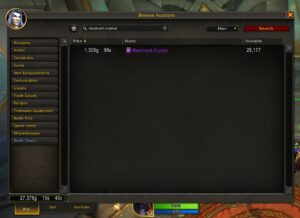 That leads me into Crafting… At first the changes to crafting sounded really great. But the reality of crafting in this new content has me pulling my hair out. The economy is a mess and the slog required to even craft things for my own characters makes me very unwilling to bother levelling past the halfway point with most of them. Most mats are super cheap, except for some very key elements (elemental mats and this purple crystal you rarely get from DEing gear that is really expensive because it is too rare). Things you can craft sell for a LOT less than the mats cost to make them. I’ve basically been seeing what my crafters haven’t learned yet, and just buying it ready-made off the AH for a fraction of the cost. Schematics might sell for 50,000 gold, when the thing you can make from them sells for 10 gold, and the mats required to make it sell for 2000 gold, that’s how skewed it is.

I’ll do first time crafts for the crafting knowledge, but I sure have regrets about how I’ve spent those knowledge points. Lots of regrets… Add in some bound-to-character purple mats that require doing a lot of world quests, treasure chest digging, or dungeons, and my desire to gear up more than one character through crafting is pretty low. Which means I’m stuck trying to decide which of my classes gets to gear up to possibly raid in the future. Sadly, it probably isn’t my first level 70, which of course had to be the new Evoker class. On paper, the crafting system sounded like a great alternative to grinding gear through dungeons. In reality, the grind is just a different type, to unlock schematics and get a lot of bound mats on every character that wants the high end gear.

So, on to dungeons and raids… I still have major dungeon fatigue from past expansions. I see friends chain-running dungeons right and left, but I truly can’t bring myself to do that. They have a pre-made group of 5, so none of them are waiting on pick up groups or stuck with the elitist AH tank or LEEEROY Jenkins types. I’m sure that makes the experience much better for them. I have enjoyed running a few dungeons with a pre-made group in Discord, that is just fairly infrequent.

My major motivation to do some of the in game gear grinds is to eventually raid. When I think about LFR or dungeon finder, I just cringe over past experiences with it. I had originally thought to make my new Evoker into a healer, but I’m still not entirely sure about that class as either a healer or a DPS. Are they solid enough and fun enough to put up with the stress of healing pick up groups and the LEEEROYs? I may end up back with the old reliable ranged DPS mage and melee DPS shaman, well, once I get them up to level 70 of course.

Levelling alts in the new zones is much better than in the last few content cycles. Once you get one character to level 70, everything you do on your alts can count toward reputation gains, although those gains are individual. The rewards are shared across your account, but that doesn’t seem to help with getting renown gated crafting schematics. There is no shared pool of renown, someone will have to push to the higher levels with each faction rather than having everyone contribute toward a shared pool. That is not going to happen with me, I doubt I’ll keep having enough fun and new things to try out for that long. Eventually it all starts to blend into the “been there done that” feeling.

I wish I’d just pushed one character to level 70 before I started doing things with any of my other alts. Lesson learned there, I didn’t anticipate the benefit of having that level 70 when it came to playing alts. You initially have to do a very linear progression through the zones to finish up the main-line quests. After you finish it on one character, each alt is free to do quests in any order they want. They can also start to benefit from world quests, although I have to ration my time on those or I start to burn out quickly. This week is World Quest week and I’m already starting to feel that “must do world quests on everyone!” urge, and I have way too many alts sitting in the new dragon city for that to be sustainable. 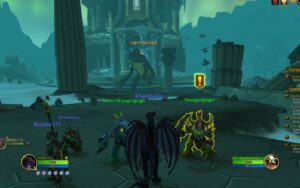 Overall I can see that the devs have learned a few lessons and made some key changes in how quickly or how much the new content may cause burn out, versus past content. For some types of players, I could see these changes being very welcome. There is also quite a lot of humor scattered throughout the quests and some Easter eggs that I have enjoyed. I’m just one of those odd mixes of casual-not-casual raider types who will probably never be happy with a gear system that relies on chain running dungeons for Mythic key upgrades. I want to be geared up to a level to contribute to a regular raid group, to have all of the best foods and best flasks to be raid ready, but that hasn’t been much fun to achieve since the old days of Wrath.

It is especially frustrating to see that the mythic plus key I got from doing an M0 was for an older dungeon, Court of Stars. While I can understand their desire to keep using all of the existing content, the over and over and over again nature of dungeon running over the past few years is very much not to my liking. The fact that they’ve kept the M+ dungeon system and the RNG weekly Vault makes me cringe.

Without a raid team or the goal of getting raid-ready to run with people who are fun to play with, I’m pretty sure I’ll run out of steam before too long. Add in the really frustrating slog to unlock top end crafting, and even that isn’t a motivation for me this time around. I’d far rather just buy the cheap fruits of other people’s labors, than slog through it on my own crafters. 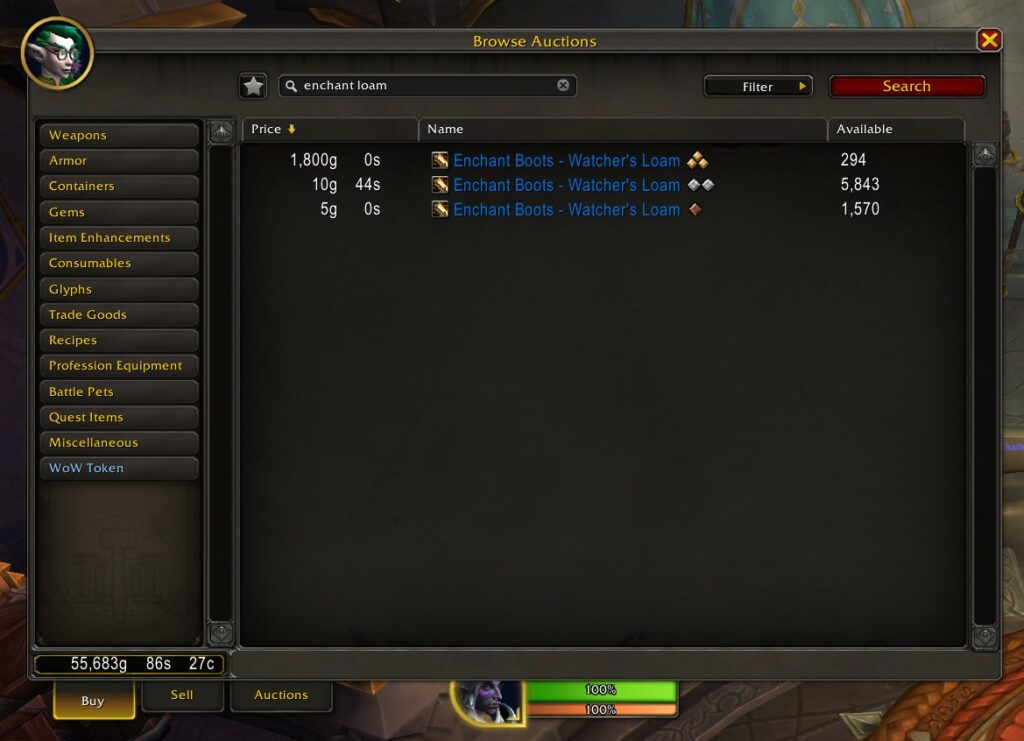 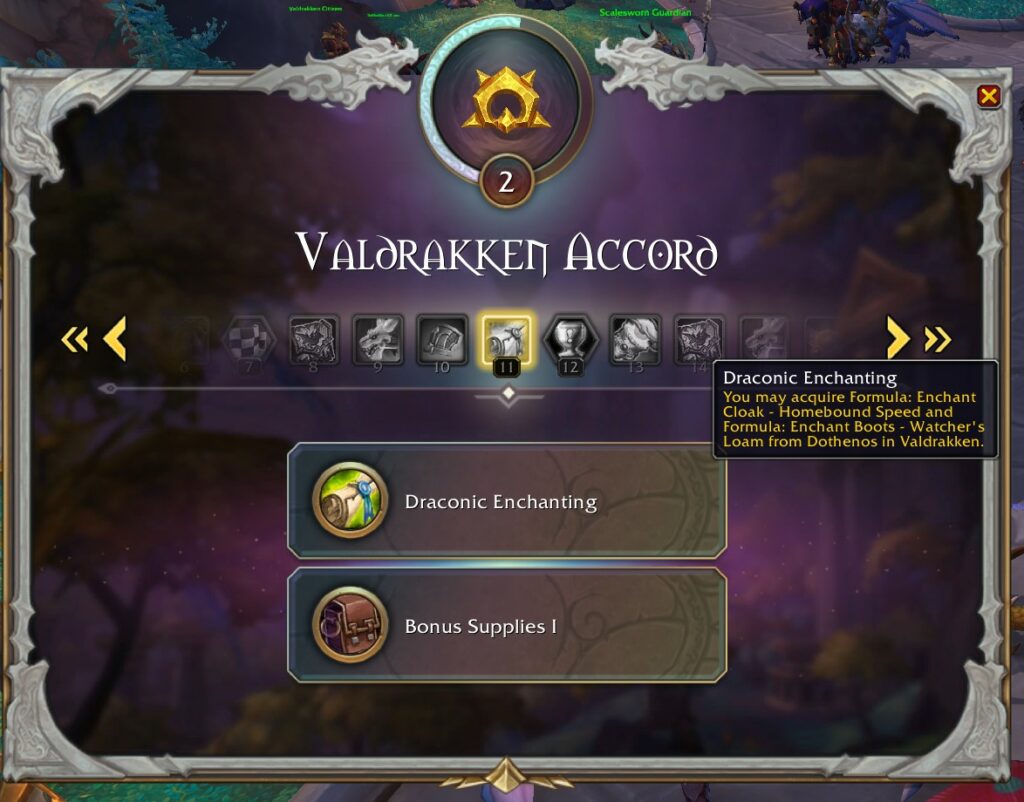 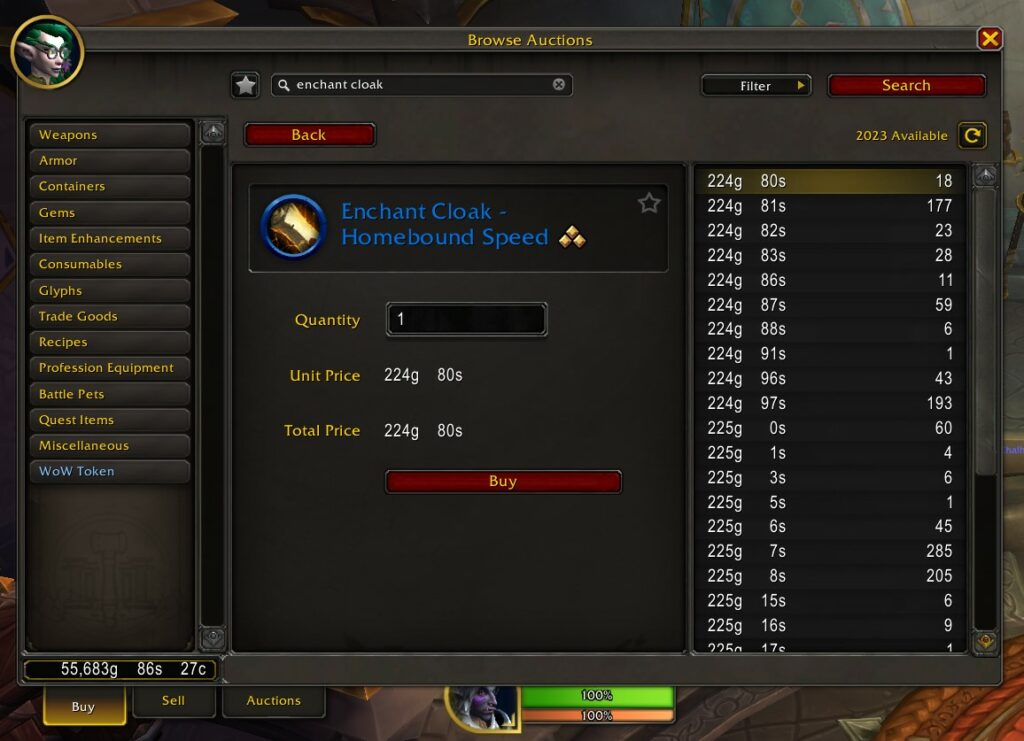 One of the things I think they got spot on in this expansion is dumping the faction wars and letting us quest together. I really enjoy not caring if someone is Horde or Alliance when out in the world doing quests. The spirit of cooperation is something that I truly welcome. Our new dragonkin haven’t been forced to pick sides like the pandas of the past were. The focus on external challenges and enemies gives the writers so much more freedom to structure quests in new ways and tell the story of this new area free of the thin excuses for conflict from past expansions.

I still have a few things I want to accomplish and some content I want to explore, but overall I’d have to give this expansion a low “grade” when it comes to keeping me engaged long term. There are some major strides in the right direction, but they still haven’t made end-game something I feel is sustainable. The initial signs of burnout are already starting to hit me and things that I might find kind of fun to pursue, like the Supervisor title for Community Feasts, are just enough of a grind that I’m not likely to push through to get them. Things are a massive mess at the feasts now with so many people there, so doing the 100 tasks to get that title makes me cringe. 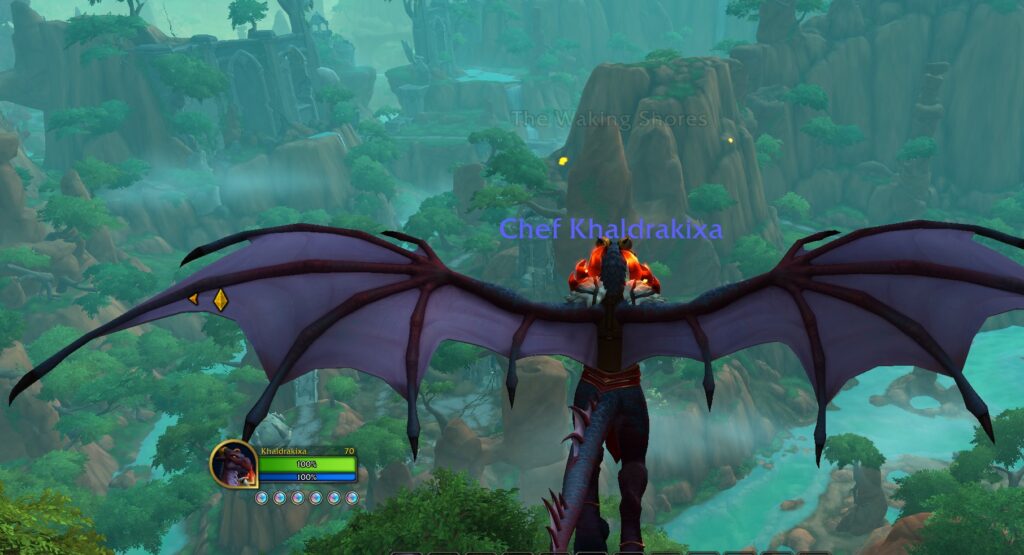 I haven’t factored in my unhappiness with the gov’t blocking Microsoft from taking over AB and kicking out BK, but that is also a nail in the coffin of WoW becoming my long-term MMO again. I guess I’m going back to being an MMO vagabond soon. Unfortunately, MMOs are structured to reward people who commit and play them long term, which is why I’m kind of sad that WoW won’t feel like that comfortable home that nostalgia tells me it once was. But at least for now, I’ll enjoying zoooooming.