I always wondered why the designers made all of the white quality armors in Star Wars the Old Republic, that you can buy from light, medium and heavy vendors on most planets. They give armor values, but no stat boosts. They’ve always seemed useless to me, until now. I have started looking more closely at those armors as I speed level my new alts. I really like the look of some of those “useless” standard armors. Now that I can appear to wear them without it having an impact on my stats, I’ve started adding them to some of my characters. It makes me wonder if there was a plan to put in an outfit designer from the early days of the game’s creation, or if those armors were supposed to have more utility.

Here is an example of a very cheap set of matching armor that you can buy early on in the game. The Synthleather set from the Dromund Kaas medium armor vendor in Kaas City is sleek and simple. It is a great look for someone playing an ascetic or for an imperial agent. The same set is available Republic side, but the look is lighter colored “leathers” rather than the darker grays. I later tweaked the set by adding a black and red dye, plus some boots I bought on the GTN. I like his new look, although I’ll probably still swap back and forth between it and his trench coat.

I  was still trying to find boots like the ones worn by the Sith Inquisitor’s apprentices and various Sith NPCs. I keep hoping to find the boots for cheap from one of the armor vendors. I have found gloves that look very much like the “containment officer” set from the original Rakghoul event. You can buy them from the heavy armor vendor on Corellia, but they are for level 43 or higher. The chest armor pieces from the light and medium armor vendors on Corellia are also pretty nice looking. 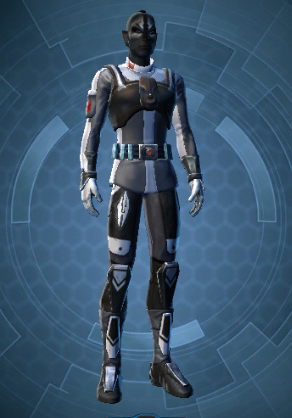 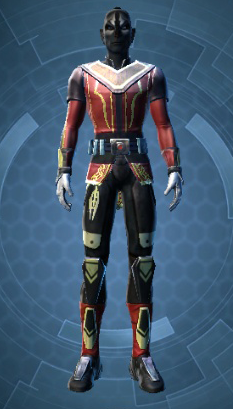 The Trellised Helm looks nice Empire side, but a little odd Republic side. You can buy it from a few different planets, and I recommend going with some of the early ones like Taris or Balmorra where it is cheaper. Tatooine has some nice medium armor in the Guardsman’s set as well as a nice light armor chestpiece in the Scout’s set. There really are a lot of attractive looking pieces, so I recommend taking a look at them as you level on various planets. I know, there are so many different armor options in the game already. Still, it is nice to have additional options for creating a unique look, especially affordable ones. And it does make me hold out hope that our companions will get the option to wear a look without it impacting their stats, sometime in the future.

[Edit] After I wrote this post, I looked through some of my cargo slots on my characters. I had the impression that one of my characters had been holding on to a pair of the armored boots I loved the look of from Kaal and Corran’s gear. Sure enough, my Sith Warrior had a pair of low level blue quality boots. These are the Hardened Terenthium Boots and they are a reward for doing one of the Heroic 4 quests on Balmorra (Settling Debts). Check out Dulfy’s post for Heroic Quests & Bonus Series rewards for more information. This same character was also saving a set of mod-able gloves that I had liked, the Dread Corsair Elite Gloves, also a quest reward mentioned in Dulfy’s post. Both are now stamped into his appearance slot, yay!

Other than the boots (which are from the Exar Kun set) and gloves, this set is also standard, from the heavy armor vendor on Corellia. I like the battle scarred look of it and that it is form fitting, but clearly armored. This is my Consular.