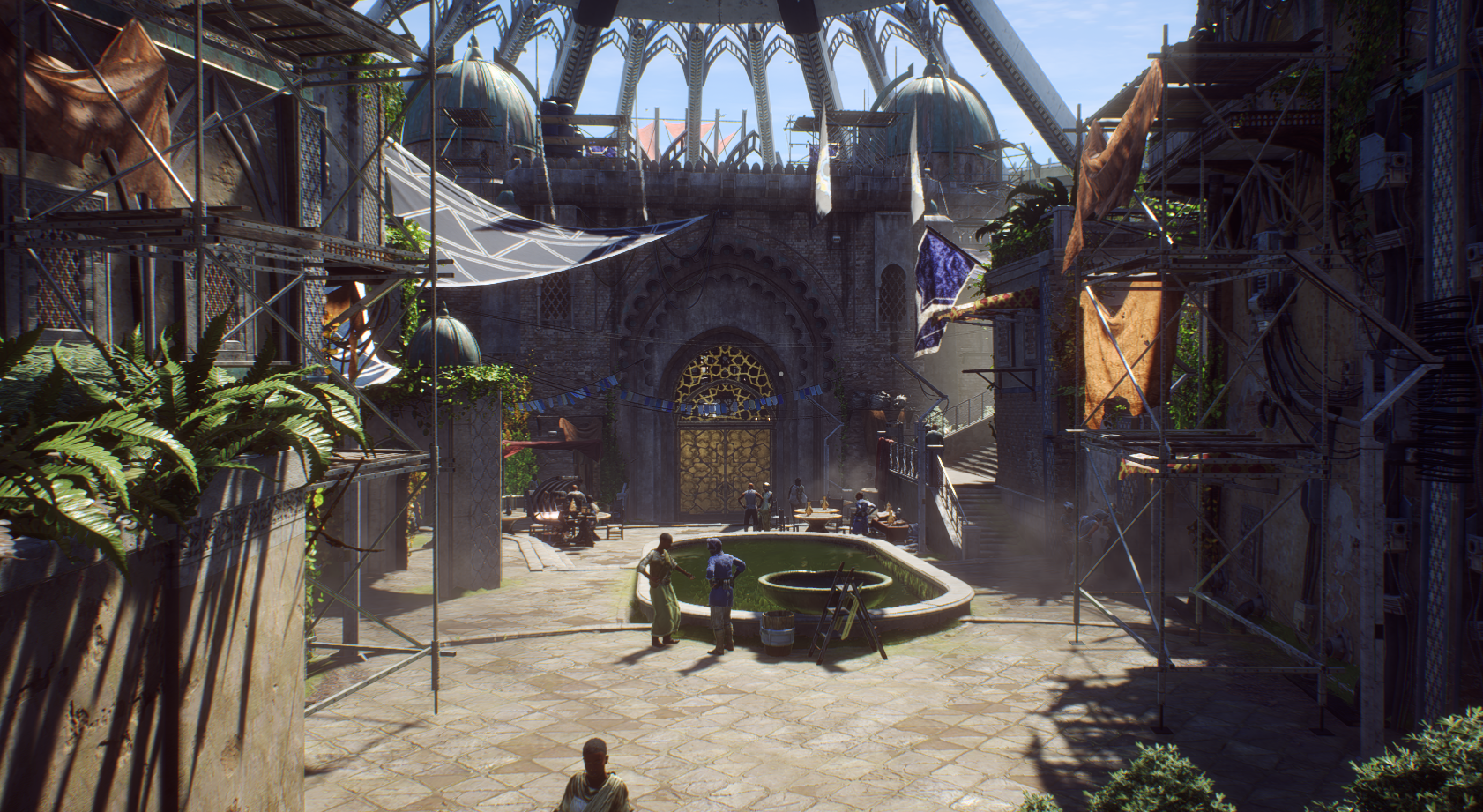 I’ve been playing a new game lately, Anthem by Bioware, and with any new content and the discussions surrounding it, I start to analyze the experience. One of the aspects I find both intriguing and frustrating about Anthem is it’s social systems. When compared to those within an MMO, Anthem’s feel extremely limited. It makes me want more social tools, which is the frustrating part. The intriguing part is that without some of those MMO features, like general chat, I find the public play to be strangely freeing and peaceful. I’ve started to re-think whether this is a lack versus a very nice change of pace.

I’m sure many of you, like me, have had to hide the general chat channels in an MMO or shooter game because of toxic players. Some have even had to change identities in a game due to extreme examples of toxic behaviors. I saw a chart recently showing why many players prefer solo games, and toxic players was the overwhelmingly large reason why. Anthem has no chat channels to hide. There are very few opportunities for childish jerks to behave badly.

While my knee-jerk reaction to the game was to want more communication and coordination tools for random groups, I’m beginning to question my actual need for those. I’m coming to appreciate how peaceful and free of drama the random grouping feels. The polite person in me wants to thank people when they help me with something or to say hello, but I have to wonder whether that overshadows the number of times I’ve had to put someone on ignore so I didn’t have to see their hateful spew. Drama-free random group play starts looking more and more appealing.

I’ve played Anthem while grouped up with friends. In their squad play of pre-made groups, I just use my own Discord channels or friend chat in Origin to coordinate and socialize. In squad play, people’s characters are much easier to keep track of than in the matchmaking system with random players. These groups are made up of people that I have deliberately chosen to connect with. I have interacted with them outside the game and pre-screened them to a certain degree. They aren’t random trolls and if they display toxic behaviors, well, they have a larger social stigma than random anonymous people, and I have means of unfriending or blocking anyone who causes excess drama.

Once I got over my knee-jerk reactions to the lack of social tools, I’ve realized how much better I feel going into public Freeplay spaces with random people. No one has yelled at me, no one has hit on me, no one has spewed hate into my eyes through chat. I don’t have to report anyone for sending me gold spam. The lack of drama has been refreshing and freeing. It is sometimes frustrating not being able to keep track of someone, we can jet around the space very quickly and get lost to sight, but there are tools to locate the other players on a map if I want to. What I’m coming to appreciate more and more is that interaction with random people in Freeplay or on public missions is entirely voluntary.

Let that sink in, those of you who avoid playing games with other people…

My one area of ambivalence regarding lack of drama versus lack of coordination is in the Stronghold system. Strongholds are more challenging content and being able to better coordinate would mean being able to succeed at the more challenging difficulty levels. This is not a problem when done with a group of friends, but when I’ve tried to run random matchmaking at higher than easy or normal levels, things have gone poorly. Maybe this is due to the game being new and all of us learning the ropes and it will get better as we mature, only time will tell.

Coordination and communication versus avoiding toxicity and drama is probably an argument I’ll have with myself for a while in this game. It is an argument that I’m likely to have with the gaming community in general for a lot longer. While we may have assumed this lack of social tools is poor design, it may in fact have been a deliberate choice on the part of the game designers. It would be interesting to have a conversation with them about it. I suspect that there were some very detailed studies done and some long talks about toxic players and ways to mitigate them.

I think what all of us playing new games need to remember, especially when they have been created by studios like Bioware, is that the people making design decisions have seen a lot of SH**. They’ve seen the best, but also the worst, from the gaming community. We demand that designers learn from past mistakes and make new and fresh games, and yet there are little voices inside each of us that fear change and long for the good old days too. It must be an extra level of frustration for game designers to navigate between the old and the new and to drag us along kicking and screaming at times.

Change feels a bit icky and we are naturally resistant to it, and yet I need to stop fighting against differences in Anthem from my comfy MMO blankie or solo-only games and appreciate what I don’t miss about them. Change is all around us if we open our eyes and see it, and if we embrace it and appreciate it then it can help us grow. How many of you playing Anthem have noticed the instanced Fort Tarsis change around you? Banners, people, repairs, commerce, random comments, all growing and improving as you play through the game. Changes for the better…

Freeplay really is very open and fluid and voluntary. Public missions and Strongholds via random matchmaking are a bit less so, but they do allow a mainly solo player to experience harder difficulties with others along to help out. Squad play lets me use the outside communication tools I’d be using with friends anyway, and lets me screen the people I choose to group with that way. And in the event of running across drama and toxicity, there is always the Ignore List to ensure I don’t get grouped with certain players again. Maybe I do have all the social systems tools I actually need to enjoy playing the game. In fact, maybe not having some of the social systems I have to hide from in MMOs is wonderful and refreshing. Maybe all I really need are a few silly emotes to acknowledge and interact with strangers.