This started with a friend asking me for a list of what one of my characters was wearing. While I was grabbing that, I started screen shotting all of my current characters because I really like the way most of them look right now. Gone are the days of being stuck with a certain set of gear. With bound to legacy pieces and adaptive gear, everyone has a slightly unique look, and pants. I never did like the “sorcerer” look of some of the skirt wearing classes, so I go out of my way to put everyone in pants. I like a lot of the gear coming out of the newest content, although we still have the occasional WTF piece cropping up. Some of the helmets are so cool-looking that I’m even willing to not hide them.

I’ve also had many envious questions about the more rare Rakghoul companion customizations, of which I ended up with 3 from that fun event.

I’m going to put in a gallery with each showing larger size (as opposed to the widget on my site that shows them very small), and then describe some of the pieces below so this post doesn’t scroll for eternity. 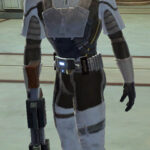